Our car rental office, which is 8 km away from Dalaman Airport, will take great pleasure in welcoming you, our valued guests. We welcome our guests departing from Dalaman Airport domestic and international lines in the passenger reception area. We bring your car, which you have booked, ready from the airport parking lot.

Dalaman Airport, one of the two international airports of Muğla together with Milas-Bodrum Airport, is 10 km from the centre. Since there are so many popular touristic places in and around Dalaman, we can say that your list of things to see and do will be quite long. While you are travelling by car in the wide geography of Dalaman, you will discover incredible places. For this reason, car rental agencies in Dalaman are very popular in the summer season. You may find it difficult to choose from among the many car rental agencies both in Dalaman airport and in the city centre. As a Dalaman car rental company, we offer vehicle options of different sizes and types that will facilitate your selection according to your budget and needs. We have a large fleet of vehicles to help you compare competitive Dalaman Rent A Car prices.

We can meet your car rental needs from the airport for the Koycegiz, Dalyan, Gocek and Fethiye regions close to Dalaman. 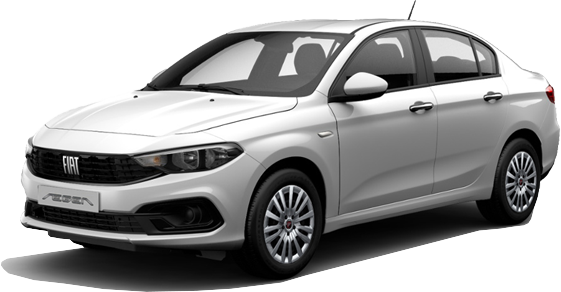 Hippokome, which means Horse City in the Old Carian language, is an ancient city established on a hill in the It Asarı locality in Çöğmen Village, 30 km from the Dalaman district center. Surrounded by 3 big rock tombs, the Ancient City of Hippokome consists of Roman and Byzantine structures and historical remains.

The ancient city of Tlos is within the borders of Yaka Village, approximately 42 km east of Fethiye District. It is on the UNESCO World Heritage tentative list and is one of the oldest settlements in the geography known as the Lycian region. The important structure of Tlos is the theater. However, the Stadium is also of great importance. Tlos is also known as the sports city of Lycia. Tlos, which is also an important center in terms of Christian history, is one of the most important Episcopal centers of Lycia. This religious significance continued until the 12th century. A must-see for those who love archeology and history. The museum card is valid.

According to the philological data of the past, BC3. up to thousands. It is a Greek village built between the 11th and 14th centuries on the 5000-year-old Karmylassos Lycian ancient city. After the War of Independence, the Turks of Thrace and the Greeks of Kayaköy were replaced by the exchange policy. Churches are at the forefront of the structures that offer visuality to the visitors in the settlement. 400 stone houses, nearly 10 churches and chapels. Immortalize this visual feast with photography.

Fethiye, which is 40 kilometers from Dalaman Airport, can be reached quite easily.

Exciting moments await action lovers in the town, which has managed to attract the attention of local and foreign tourists with its artistic areas, mosques, king tombs, ancient cities, castles and the historical Lycian way. The International Air Games Festival is held every year in Fethiye, where nature sports such as paragliding, rafting, mountain climbing, diving, windsurfing, canoeing, boat tours and trekking are widely practiced. Tourists from many parts of the world flock to the region, especially for paragliding, which lasts for 50 minutes. Fethiye, one of the most popular holiday destinations in the world, fascinates its guests with its streets decorated with cut stone Greek houses and wooden Turkish houses, and its natural beauties with every shade of green and blue.

Butterfly Valley is located within the borders of Ölüdeniz town of Fethiye district in Muğla province. Surrounded by steep rocky walls reaching 350 meters, the valley got its name from the more than 80 butterfly species it hosts, especially the tiger butterfly.

It is approximately 23 km from the center of Fethiye. It is 55 km from Dalaman Airport. It is quite difficult to complete this journey by car and witness this perfect view. You are climbing a steep slope that is very winding. Regardless, it is strongly recommended that you be very slow and careful. Apart from that, when you reach the top, you encounter a wonderful view. It is a very famous place, especially for photo shoots.

Saklıkent Canyon is located within the Saklıkent National Park, located in Muğla's Fethiye and Antalya's Kaş districts. It is located 46 km from Fethiye. There is a sulphurous water source at the entrance of the canyon. There is a hot spring in this part. It is good for skin diseases. There are resting areas and cafeterias in the canyon. With a total length of 18 km, the canyon cannot be walked except by professionals.

Ölüdeniz is a neighborhood in the Fethiye district of Muğla province. Ölüdeniz beach was chosen as the most beautiful beach in the world in 2006 with eighty-two percent of votes. The distance from Dalaman Airport to the town is 45 minutes.

Since the beaches around Ölüdeniz are constantly struggling with waves, not a single wave has been encountered in Ölüdeniz. Therefore, the name of the town became Ölüdeniz. This natural wonder attracts thousands of local and foreign tourists every year.

The distance between Marmaris and Dalaman Airport is 95 km.

Marmaris Castle and Archeology Museum and Marmaris Grand Bazaar are among the impressive places of this region. In addition, there are many holiday resorts in magnificent bays in an area of approximately 50 kilometers around Marmaris. From these towns; Hisarönü, Orhaniye, Selimiye, Bozburun and Akyaka are medium-sized bays, while Kumlubük, Çiftlik, Söğüt and Turgut are small bays. If it is not your first visit to Marmaris and you are looking for a different and calmer holiday, you can try these resorts.

Marmaris is also a corner of paradise for those who love camping and glamping (boutique luxury camping). There are also camping areas, forest camps, beach camps, bungalow camps and luxury camps (glamping) that offer various opportunities among magnificent bays and greenery in and around Marmaris.

These ancient cities were small Carian cities, and not many artifacts have survived to the present day, except for the remains of castles and fortifications. The city of Kadrai is a larger and more important city among these cities than the others.

Koycegiz, BC. In 2000, with the Greeks and Achaeans coming to the Aegean coast by sea, new colonies were established on the coast, and development was achieved with the colonies of Carians in the interior. Thus, the county It has been in a very good position in 1000 years. At the junction of Köyceğiz Lake with the Mediterranean, the city of Kaunos became one of the important ports and trade centers of Caria. Acropolis, famous temples and Harab and Susan Castles are important historical monuments.

The city of Kaunos, one of the important ports and trade centers of Karia, which was established in the region where Köyceğiz Lake and the lake joins the coast, increases the importance of the district in tourism.

Dalyan got its name from the Dalyans located on the Dalyan Stream. The meaning of the word Dalyan is "fish trap". This area is known as an old fishing town. Although there are fertile agricultural lands, tourism makes a greater contribution to the development of Dalyan.

Iztuzu Beach, which is one of the most beautiful gifts that nature has given to this environment, the King's Tombs and the Ancient City of Kaunos, its healing waters, mud baths meet all the expectations of those who come to Dalyan for a holiday.

Other places that must be visited in Dalyan are as follows:

Dalaman Stream, which is one of the most preferred places for rafting, offers entertainment with its wildly flowing waters and is a frequent destination for those who want to relax.

Rafting points in Dalaman Stream can be reached from Marmaris, Dalyan, Fethiye, Turunc regions and Dalaman airport. It is 20 km from Dalaman Airport. The water level of the Dalaman Stream, which can be rafted all year long, rises especially in September and October.

Sarıgerme Beach is located within the borders of Sarıgerme village of Ortaca district of Muğla. It is 17 km to Dalaman Airport and 12 km to Dalaman town centre. It is possible to reach the beach by private car or by intercity buses.

It is also called Dalaman Sarigerme Beach among the local people because it is closer to Dalaman district. It has a 7 kilometer coastline and a 100 meter wide beach. The beach is completely covered with golden yellow sand. The sea is shallow up to a hundred meters and does not exceed the waist level of an adult. The sea is calm and waveless. 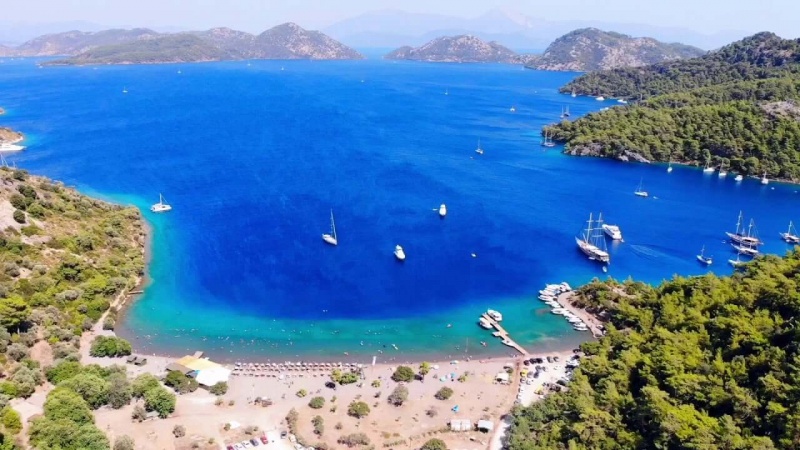 After turning left at the previous junction from Dalaman airport, the bay sea, which is approximately 25 km away, is magnificent. It is a very beautiful bay, but the road can be dangerous for inexperienced drivers with many bends. After a certain amount of payment is taken at the entrance, you can either rent a sun lounger or use the cover, umbrella, etc. that you brought with you.

It fascinates holidaymakers with its magnificent nature and magnificent viewing pleasure. If you want to spend a holiday in the trees, breathing nature, we say that you should never miss Gökgemile Bay in Dalaman. There is a beautiful trekking area, you can also come across visitors who come here to set up camp.

Akyaka, which is a favorite of holidaymakers with its green forests, untouched clean coves, has started to be known as a tourism resort after the 1980s. After it was declared as a natural protected area in 1988, high-rise buildings were not allowed and it preserved its natural structure. As of 2011, Cittaslow has been selected and its name has been written among 11 quiet cities in Turkey.

Akyaka is one of the most preferred holiday resorts in the Aegean with its magnificent nature. If you want to wake up to the sounds of birds in the morning and swim in its untouched magnificent bays, you can choose Akyaka. Akyaka is suitable for all kinds of nature sports. It is popular with local and foreign tourists in the summer months. You can take a walk in the clean air, see untouched coves and swim thanks to boat tours. You can cool off by swimming in the ice-cold water of Azmak river.

Akyaka fascinates those who see it with its natural beauties as well as its historical beauties. Although there are few places to see when you come to Akyaka, it is one of the places to be seen. places to visit; Akyaka Beach, Çınar Beach, Sedir Island, Akbükü Bay, Küfre Bay, Değirmenbükü Bay, Sakartepe Observation Terrace, Akçapınar Village, Idyma Ancient City.

The Ancient Blacksmiths' Bazaar, which started to serve in the 13th century, was built by the Greeks. You can reach the bazaar after a pleasant 30-minute walk from the center of Dalaman and have the opportunity to see many details about this historical craft branch in its place and at its source.

We recommend you to visit this bazaar to learn about blacksmithing, one of the most important craft branches of the past, and to buy wonderful souvenirs and daily use items made of iron.